The wind was howling. Flash, Crash, and the rain fell. It was the first lightning storm in a long time. It rained off and on all night and stopped when I got up but the wind was still whipping the tent.

Guthook’s app said that the next water was 42 miles away.. 42 miles???? I guess that means I need to load up. Three and a half liters is heavy. Almost 8 lbs… 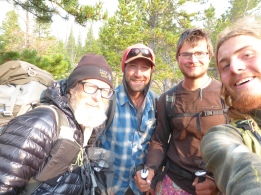 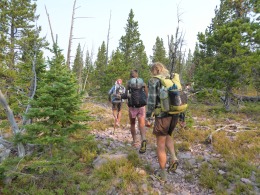 Two hours in,  I stopped to make coffee and have breakfast. I had already got off trail, (Lost) and bushwhacked back on trail. Lint, Grapenuts, and Patches stopped to humor me for a short talk then off they hiked. It was the second time knowingly that I have been passed. Very humbling. I guess I will start to see some north-bounders. Great…..

I looked at the map and planned to refill my water at Gold Creek. It looked like there was a new trail that went right by it… Well there was no trail. I hiked down FS 1827 for a half mile and there was water….. Sorry, not that easy..  it was seeping with no dipping puddles. I put on my creative thinking cap and flipped my spoon over and used the handle as a funnel. Slowly the water ran into my squeeze bottle.

Twenty minutes later I was back to FULL water. Hopefully it will last all day tomorrow  to Rogers Pass and Lincoln, Mt 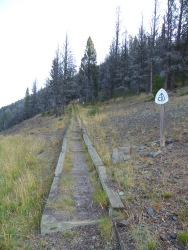 At 7:45 my legs were aching and time to turn in. I found a place on the map where the contour lines were far apart and green… Great a flat spot in trees…. Yep it was flat…..and trees.