As we were drinking our coffee Smurf gave Flop and I an update as to his physical condition… “My left knee has an issue and the pain in my side is back”. The new Osprey Amos pack is not helping. “Well let’s take two vitamin I and see what’s up”…..I said. 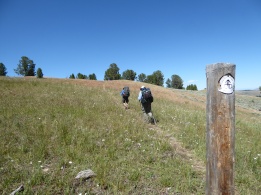 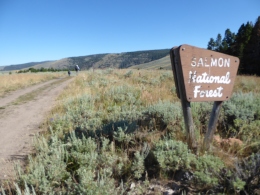 It didn’t take very long to see we were not going to make it to Darby like this. Lemhi Pass was 6 miles away so I turned my phone on and amazingly I had coverage. I called Sam and the angel that he is agreed to pick up Smurf at 10:00 am. Smurf worked through the pain and hiked without one complaint. Tough dude. We were sad Smurf couldn’t continue and happy Sam could pick him up in the middle of nowhere. Again we were two. 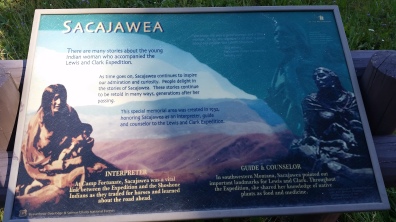 We had a twenty mile section to hike without water so we filled up at Lemhi Pass. Smurf met a south-bounder that said there was water off trail in six miles. Four litters of water for six miles or one? Humm. I will carry one, then three. That’s better. 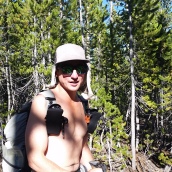 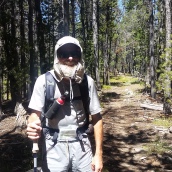 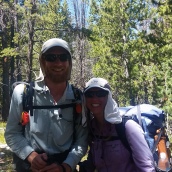 We bushwhacked to Patti Creek and loaded up with three liters of cow flavored water. We hiked back up the trail and found a great place to camp at 9,000 ft on the divide. I love camping high. We even had phone service but much to late to call anyone. I caught up on my blog and uploaded a few.

On the Divide before Goldstone.
24 miles