We hiked the last of the Beaver Head Mountains, Dropping all morning to the South Fork of Sheep Creek. Then over to the North Fork all the way down to 5,800 ft. As we ate lunch, flies landed all over us. I had my trash out and no flies were on the trash, they were all over Flop. Flop was covered….. and I was covered. I wonder if it was because we haven’t had a shower for five days now…. Hummm?          After all the descent, we paid for it dearly. All afternoon we climbed….. Steeply then descended ……  Steeply. They were old forest roads the where a thrill for ATVers to ride but gaspers for Flop and me.

We made it to Big Hole Pass where a ATVer told us there was a problem ahead….Oh no we thought….A PROBLEM…. “What problem?” Flop asked…. “The trail disappears” he said……. We hiked on thinking… Or Not Thinking what ever you pick……

We made it to the divide and hiked the rolling spine till we reached much needed water at Nez Perce Camp. Derek was there with a slew of hikers hiking three select hikes in the area. It was late so we really didn’t have enough time to share…. Bummer. 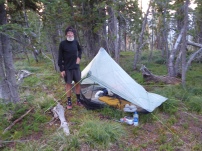