We knew there would not be any water till we were able to reach I-15 where we were going to go to the Mountain View Motel in Lima Montana. Mike and Connie are very nice to CDT hikers and GDT bikers. Both trails cross near Lima. We were hiking along the actual Continental Divide which is rare. We criss-cross it multiple times but not along it very often. 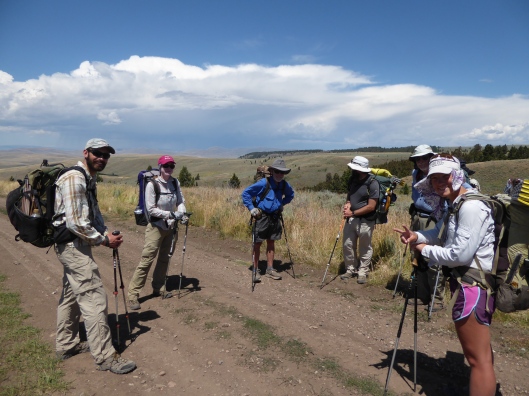 We met Beads, Machine Gun, Hand Stand, and Kramers hiking out of town, hiking south. They spoke very highly of Mike and Connie.  I met Beads in Ashland, while hiking the PCT in 2012. It is a small world and was nice seeing her and the happy group of hikers. They gave us lots of tips. We shared smiles and hiked on…. See you down the trail of life.

We were dropping in elevation and I was watching Poppa Smurf dropping his left shoulder.  “What’s up Snurf? My side is really painful” was his reply…. “Can I help? No thank you” . The standard responce….as expected…

The ultra light packs have hip belts incorporated into the packs. They pinch and for me…uncomfortable. For a weekend, Maybe ok… You hurt all over anyway, but for a long distance hike….I question. The full separate hip belts are my choice. Another lesson learned.

We were carrying over two liters of water so we were heavy. The weight of the water and belt configuration dug into Smurfs side irritating something on his side.. Maybe a hernia. The pain grew and was painful to watch. We traded packs to see if my hip belt might fit better. The Osprey Atmos also has a pinch belt and hurts. Flops ULA Catalyst has hip belt is separate from the pack and removable. That will be my next pack in the never ending quest for the best gear.

We reached the service road and called Mike to come and get us. The rain clouds caught up to us, gave us a washing as we danced to the sounds of the Rolling Stones on the short two mile road walk. Mike pulled up and we were off to a much needed break.

Smurf met Joe at Jan’s Cafe as we were having dinner. Joe had a Green Bay hat on and Smurf is from Green Bay and needed help. Joe was traveling around Montana and agreed to drive Smurf back to Lander WY to get his car and some medical advice. Well another change in the all together separate group.