I woke up at 5:45 and we were starting at 6:00 so I had to hustle. We we dropping from 10,200 ft to 9,500 ft along a road bed. I remember growing up enduring the mud season. Lingering snow and melting frost heaves. I talked about mud previously but this was different, much different. I could do the moonwalk sideways, front-ways, and back-ways. 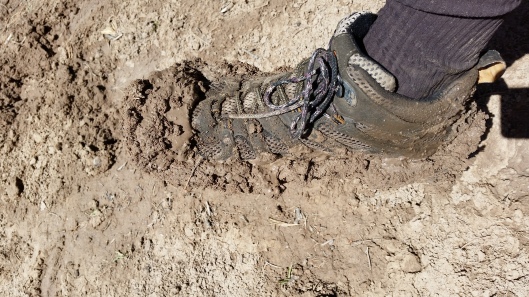 It was crazy. My legs were moving but I wasn’t. As I was attempting to walk, I wondered how the trail kept pounding away at me. Nothing personal, a quiet pounding. Just when you thought you could deal with something then ….. Wow I never thought. ..

We dropped to Rio San Antonio stream and stopped for breakfast with hot chocolate. …and coffee….

The sun was shinning and it was one of those moments that it’s all about.  It was wonderful.

Back to the trail and soon we were in breaking trail in three foot drifts and searching for the trail at the same time. It was another challenging moment. We were hardly moving and there was an alternate parallel trail on a  dirt road a quarter mile below us. After a short discussion, we headed down. There it was a beautiful muddy dirt road…..Humm here we go again.

We climbed to 10,900 ft and decided to stay on a road trail even though it was covered with snow drifts. We could follow a snow covered road, a snow covered trail is a different story.

We were also following Alex and Wagon Wheel’s tracks who were two hours ahead. They hike later and we get up earlier. Usually we see them by ten o’clock in the morning, but not this morning. Maybe they were trying to make it to Chama today. Either way we will see them in town.

Saw A Heard Of Antilope