As we slept, there was a little thunder and the wind blew but no rain and no dew. The goal was to get a earlier start so the alarm woke us at 5:00 am and at 6:29 we were off to a great start. 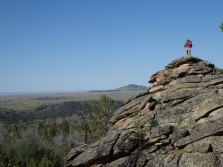 As we hiked we were wondering what was the big deal about the Wind River Range. When we passed the Sweet river campground we saw Mt. Nystron which at 12,366 ft was a big deal. The mountains were majestic and best of all, little snow!!!

All along the trail we could see the work of trail maintainers and soon heard the sound of chain saws. Val, Cody, and Tammy were from the Pinedale and Lander chapters of the Backcountry Horseman. There were a lot of trees across the trail that they had sawed up.. Cody gave us his bear spray since ours was coming at Brooks Lake Lodge. Thanks so much. 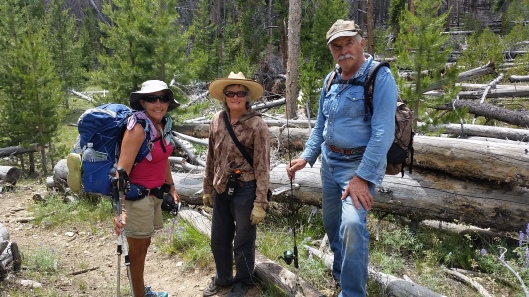 Later we crossed paths with Straight Arrow and Iron Stomach, locals out on a fishing hike. They showed us their fish and gave us some cherries…Yea trail magic!

When we got to the top of Dutch Joe Larson Creek Trail, 10,120 ft. We realized the CDT turned left and off the maps we had. We hiked down past Little Sandy Lake and had dinner on an rock overlooking two unnamed high mountain lakes.

After dinner we followed Bear Creek way-points to Little Sandy Creek which wasn’t so little. We looked at the map and the trail shifted uphill before the crossing. We looked for the trail and decided to aim for a way point since we couldn’t find trail. After bushwhacking for a quarter of a mile we were back on the CDT.

We found a Campsite and after a heated discussion about hanging our food, Moonwalker demonstrated why she is considered the rock throwing, food hanging Queen from her days on the AT.. Up the food and smelly stuff went since we were sleeping in Grizzly country. Night Night